THE HOPKINS GALLERY STORE
"Art should be judged by the finished painting and not by the time it takes." Milton Welt​​

​About Artist
Bio of Patricia Hopkins 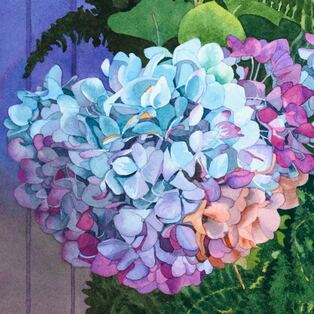 Art Style
In childhood Patricia developed a keen appreciation for the beauty and peace in nature, which she now tries to capture in her watercolor paintings.  For each piece much preliminary work is involved. First, many hours are spent photographing scenes with interesting lighting and good composition. She then begins her drawing, which is like a sort of skeleton in that everything is accurately there that she wants to be in the finished painting. Each color is mixed with much care so that it is clean, works well with the rest of the palette, and is a planned decision. Her art style is representational, and her paintings include landscapes, nautical scenes, florals, and pastoral scenes.

Art Education
Pat's education has been art-related whenever possible. During her senior year in boarding school, she was allowed to develop some creative skills. For her independent study she worked from photographs and drew pencil portraits, attempting to show the unique character in each face. Pat took art classes at Hollins College in Virginia and was encouraged when she won a first prize for a drawing in a Roanoke College art show. Back in Boston, she furthered her education at The Museum of Fine Arts and The Art Institute of Boston. She graduated from New England School of Art & Design with a special interest in illustration and design.

Art Experience
For about five years Pat worked in the commercial art world mainly as a mechanical artist. She was able to do some illustration work, the most challenging of which was a magazine cover. The companies for which she worked included a graphic design/magazine company, the communications department of an engineering firm, the advertising department of Jordan Marsh Company, and a fashion advertising company.

Soon after Pat moved to the Cape she began watercolor painting in 1990. She has taken workshops with several well-known watercolorists but has mainly studied with Christie Velesig for eight years. Pat became a signature member of the Orleans Art Association in 1990 - 1993, volunteering as the Membership Chairman and winning first prize in the Spring Show, both for two consecutive years. She has been a signature member of The Cape Cod Art Association and the Creative Arts Center in Chatham from approximately l999 to 2016.

Pat was an original member of "21 in Truro” - a group of well-known, women artists from l999 to 2001. She has exhibited in numerous galleries, been in four national shows, and given three one-woman shows in The Old Selectman's Building in Barnstable from 2003 to 2007. From 2007 to 2015 Pat enjoyed having a little gallery/studio at 820 Main Galleries in Harwichport. Today she shows her watercolors, giclee prints and cards at The Hopkins Gallery in South Chatham, MA.

Pat does paint commission work for people in the same price range as her gallery paintings. Oftentimes people have an idea of what they would like to see in a painting but can't find it in a gallery. It may be something in their mind or a specific photograph. Or perhaps you might like a painting of your house, your boat, or your pet. So please let me know if I can be of service.